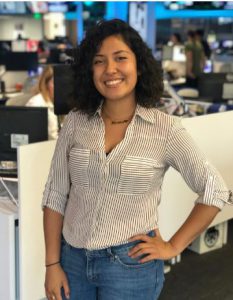 1. How did you apply for these internships?

My internship with Telemundo was a result of a career fair with CCNMA Latino Journalists of America and the National Association of Hispanic Journalists. I was heavily involved with NAHJ during my school years and it benefited me immensely. At said career fair, I dropped a copy of my resume at almost every booth, even if I wasn’t actively looking for a job since I was still in school. About a month later, NBCU Careers called me from New York offering me a paid internship with Telemundo and although it wasn’t in the area I wanted, I decided to take because I knew it would open doors for me and it did.

2. What were your daily tasks?

My daily tasks consisted on doing research on the Hispanic market and its most common uses and practices as far as spending and what markets they were a big part of. I was also able to see marketing shoots and create presentations showcasing what Telemundo could offer to other companies as far as advertising.

My second internship at the same company, but with NBC, consisted of assisting the early morning producers write scripts for the early morning weekend newscast and help my supervisor, who was both an anchor and reporter, manage his social media.

3. What skills were needed for this position? Do you think CSULB prepared you for it?

The skills I needed for these two positions were story pitching, social media, reporting and gathering/research. CSULB did prepare me for this, but I am a firm believer that being as hands-on as possible will always help more. Being out in the field and working at such a big company and market as Los Angeles made me feel confident in my skill set and passion for my career.

4. What was the highlight of your internship?

The highlight of my internships was being able to work at these sister stations two semesters in a row and go back to the same newsroom as an employee. After concluding both internships, I was part of The New York Times Student Journalism Institute for two weeks and came back to Los Angeles for a job at the station that taught be about the broadcast television work in journalism. NBC and Telemundo will always hold a huge place in my heart.