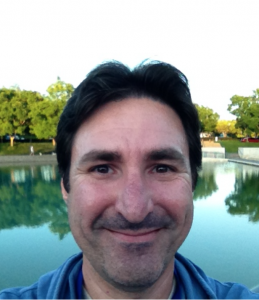 Joseph Felix Diminutto, BA in Philosophy & Geography ’12, MA in Geography ’16
After ten years of working professionally in the realm of theatre and television, Joseph earned his AA in theatre from Long Beach City College in 2010, and then transferred to CSULB to double major in Philosophy and (physical) Geography. Upon graduating cum laude in 2012, he went on to earn his MA in (human and cultural) Geography, as well as his certificate in Geographic Information Science, from CSULB in 2016. While achieving his academic goals Joseph supported himself by working as an American gondolier, and since 2005, has rowed over 10,000 romantic cruises throughout the Naples’ canals in Long Beach, California. Joseph is now a Geography and GIS instructor at CSULB, Saddleback College, Fullerton College, Soka University, and El Camino College.